The time is upon us once more!

The time has come yet again to begin plans for the next Refugees of the Olde Worlde!
This will be our third year and as it is a new year there are going to be some changes in
the works for this year’s tournament. First the basic housekeeping to get us started:

The date of the event will be October 19-20th of this year.
A full, detailed schedule will be forthcoming, but expect a similar load to last year.

Entry fee will be $40 if paid before September 18th, afterwards it rises to $45.

Present player cap is set at 24 players, but if there is a demand
we will secure the necessary table space for additional players.

The tournament will be held at Game Pulse in Rexburg Idaho as
it has been in previous years.

And, for the first change of the year, lists will be for 2200 points this year!

I will be in the process of updating the prize support page as we received product,
but as of now we have confirmed sponsorship from the following companies:

With several others still awaiting responses.

This year we have a few changes that we are going to be announcing.
For starters, we have custom dice for this year! Check em out! 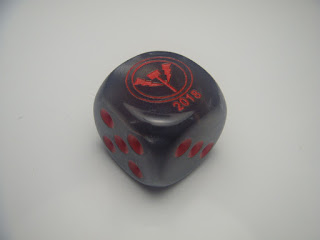 Beyond that we are changing up how we do prizes. From now on First and
Second of each place will gain their usual $25 and $10 respectively for
their positions to Game Pulse, but instead of them receiving army boxes,
we are shifting gears and will instead be giving out some pretty sick
trophies/specific prizes that we feel will better fit a general who is standing
atop the broken bodies of his/her enemies.

The reasoning behind this shift is because, if we’re honest, the people who are winning
the top spots at the tournament are generally people who already have a plethora of
models or armies to choose from, and it seems as though this is less beneficial for them
than a sweet piece of memorabilia from the tournament will be. Also, if we’ve proven
anything in the last two years, it’s that we don’t do anything small, so these prizes will
be cool and appropriate for the winners of each category.

Stay tuned for pictures of these prizes as we receive them.
We will still be having the Golden Raffle and our Prize Table
is looking sweeter than ever with many of our previous years’
sponsors coming back and already some new ones joining the
fray, and we’re still early on in our search for sweet loot for all of
our players. The grab bag is looking cool for this year, as well,
and you should walk away with, at the very least, your cost of entry
worth of cool models and swag from the tournament!

We will be allowing first round challenges this year! If you see a name
on the registry and you really wanna make sure they get their teeth kicked
in on the first round, then you can easily challenge them. All challenges
must be made publicly and, preferably, with some splash of theatrics of one
way or another. All challenges must be subject to TO approval
(though I doubt that I will disallow any challenges) prior to official, public displays
of gauntlet throwing.

Lastly, we are making it official, putting a ring on it, staking our claim, whatever
you want to call it. This year we are officially calling this a Grand Tournament in
the Pacific Northwest Master’s circuit. We’ve been building to this over the past
two years and this year we hope to continue being one of the biggest events in
the Pacific Northwest. This will also be a cross regional qualifier for the Mountain
Region as well, so those of you from Utah and the western side of that massive region,
come on over and get your game on!

We look forward to having everyone out and are excited to get this season rolling!
If you have any questions feel free to ask them hear or email me at
refugeesoftheoldeworlde@gmail.com and I’ll answer as quickly as I can.


Happy gaming, and we’ll see you in October!
Posted by Refugee of the Olde Worlde at 6:33 PM