Filling out that Trophy Case

Here we have the remainder of the trophies for Refugees with one notable exception. We don't have the  Best Overall Champion trophy... yet... that will come at a later reveal as it's cool enough to have its own post about it.

First things first! I wanna show off the trophy for the Counter Charger! I'm just super proud of how this one turned out and am looking forward to giving it away come October, have a look! 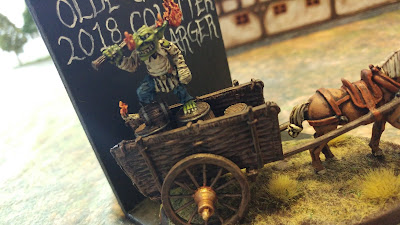 I painted this bad boy myself and I'm rather pleased with how he turned out. As a bit of trivia, Refugees of the Olde Worlde was the absolute first tournament to give a Counter Charger award, ever. Mark Zielinski suggested it when I first went on the podcast to talk about Refugees waaaay back when in 2016, and since then there have been Counter Charger Awards given out across the globe at Kings of War tournaments ever since.

Since the award is based off the Counter Charge Podcast (seriously, if you haven't heard of them, then you need to click on the link and give them a go!) and their mascot is Blaster the Goblin, I figured I would use their official model as part of the trophy for the award named in their honor.

The Counter Charger is an award given to the player who sits in the dead middle (rounded down) of the pack as far as generalship is concerned. This award is meant for the "Everyman" of this hobby, somebody who likes to play but isn't a hardcore veteran of the tournament scene. Because, let's be honest, those kinds of players make up the bulk of the player base for this wonderful hobby and they need to be celebrated, too!

As long as I run Refugees of the Olde Worlde, I will continue to have a Counter Charger Award. This event and this award are both celebrations of the community as a whole. Not just the most tactical, artistic, or gregarious ones, but everyone who makes up this great, global community of which we are part in playing this game.

Now we have the most orthodox of the awards, starting with Best General: 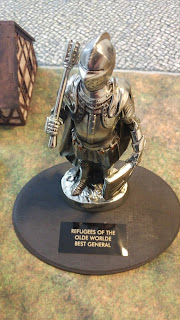 Best General is the player who scores the highest in Battle Points that is NOT either First or Second Best Overall Champion. My reasoning behind this is that Battle is worth the lion's share of a player's overall score, and so likely the player that wins First or Second Best Overall is already at the head of the pack with his generalship and doesn't really need another trophy to take home. However, I still wanted to honor the player whose primary focus was leading his troops into battle, and thus we have the Best General Award. This dynamic knight will watch over your trophy case, should you take him home, and guard against any posers seeking to steal your fame. He's a pretty cool statue all things considered and hopefully whoever wins him will be excited to show him off to your fellow players wherever you come from.

I will go into more detail later on Battle Points and Scenarios in later posts. For now just know that this award goes to the player who wins the most games with the most margins of victory.

Lastly, we have the award for Best Paint: 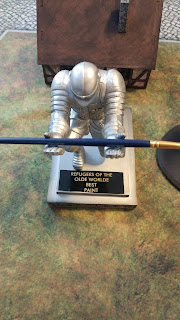 This guy lives to hold your paintbrush for you and will serve to remind you of your fantastic paint skills as you sit at your hobby table in the chilly months following the tournament.

There are two parts of the Best Paint category this year. The first is a self-evaluation of your army where you will be asked the following questions:

These questions will each have a different weight in your paint total. If the judge notices obvious discrepancies between what the player gave as a response and what their display shows, points will be removed as the judge sees fit up to and potentially including disqualification from the paint competition (and thus the Best Overall competition by extension). Be honest, but like the Player's Choice criteria, be kind to yourself.

After the self evaluation, the paint judge will add points at his own discretion based off technical skills in the areas of Paint, Modelling, and Overall Display, with a tie breaker for Judge's Favorite being awarded to a single army in the competition.

(A special thanks to Kris Kapsner, this is a liberal ripoff of the Lady of the Lake Paint Criteria that he used for his tournament, but it worked so well I thought I would steal it, with his permission of course)

So that's it. We've gone over the three categories: Generalship, Paint, and Sportsmanship, between this and the previous blog post. All three of these categories are averaged together (with a heavier emphasis placed on Generalship) to decide who our Overall Champion is. I'll go into more specific scoring for Paint and Battle at a later post as this one has already gone a bit long, but the general gist is that if you want to win Best Overall, you gotta do well in all three categories.

So sharpen your spurs! Perfect your palette! Gear up your gregariousness... That last one didn't work but you get the idea. This event is shaping up to be a great one, so don't miss out! Very soon I'm going to go over our prize support that every player is eligible to win! Sign up today! 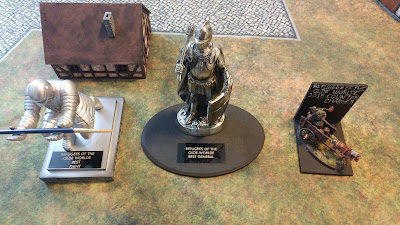 Posted by Refugee of the Olde Worlde at 2:56 PM