Player's Choice and another Sponsor Spotlight!

This year has heralded a few changes to our regular format. One of the biggest changes is in the form of prizes. Usually in the past we have given away models for our top performers in each of the categories. This year, however, we have changed this and have decided to give out trophies instead. The reasoning behind this is that the players who are performing at the top levels in each of these categories likely already have a plethora of models and don't need new armies, but having something they can point to and say "I was the champion of this year" is something far more impressive and long lasting.

As such I'm going to start presenting the trophies for each category in various blogs and hopefully that'll get you hyped to play and win some of these awesome wares to display your prowess.

First up is the trophy for player's choice: 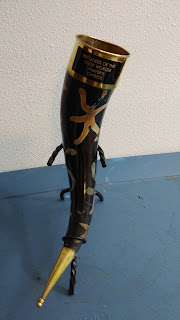 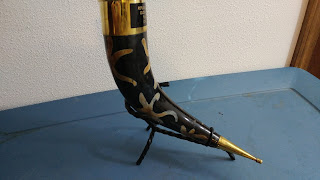 That's right, the lucky fellow who is voted to be Player's choice by all of you will receive their very own drinking horn, stand included. This is a fully functional drinking vessel that we hope will sit proudly on display near the winner's paint station or somewhere prominent in their home. I would recommend washing it before drinking out of it, but do so by hand as this is not dishwasher safe. I was very excited to showcase this trophy as I think it is a right good fun reward for being a good sport all around.

Remember that Player's Choice will be decided through the following method:

After each game you will answer the following 3 questions about your opponent:

1. Would you play this opponent again?
2. Was this opponent respectful towards you (i.e. they played a good, legal game and did not make you feel bad, irritated, or angry in the way they spoke to you or treated you.)
3. Was your opponent on time and did they provide a paper list for you of their army in its totality?

For each yes response given for each of these questions your opponent they will receive 1 sportsmanship point. Then at the end of the tournament you will rank your three favorite opponents, giving one opponent a gold award, one a silver, and one a bronze. For every gold award you are given by your opponents you will receive 3 sportsmanship points, for every silver 2, and for every bronze 1 additional point. Then, lastly, you can give a final nomination for player's choice which can be for any other player in the tournament besides yourself and this player will gain an additional 2 sportsmanship points. Whoever tallies up the most points at the end of the tournament will win the trophy, as chosen by the players.

We do ask players to be objective when giving out sportsmanship points. It's one thing to have a bad game because the dice weren't in your favor or your opponent simply outplayed you. It's very poor form to mark a player down because of those things. It is entirely a different matter if the player was dodgy in their movement, picked up their dice too fast for you to really see if they really did roll seven 6's to wound, or threw a tantrum when they didn't get the double 6's they needed to route your unit.

Please, be wise and generous in giving your sportsmanship points out.

Now, onto the second portion of our post: Another Sponsor Spotlight!

This time we'll be looking at the wonderful playing mat provided us by Killing Fields WarGame Battlemats. These awesome mats are made using teddy bear fur to simulate the long, flowing grasses of an open plain. They are truly beautiful and add a very cool dimension to your battlefield. Take a look: 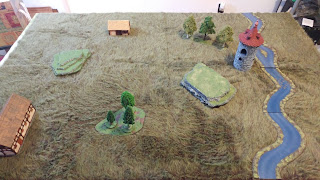 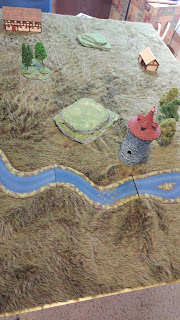 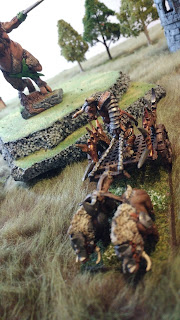 This will be one of the tables for Refugees of the Olde Worlde this year. Originally Killing Fields sent this for last year's tournament but it didn't arrive in time, so we're making sure that they get the notoriety this year.

As you can see it offers a whole new look to your battles and is extremely dynamic. The teddy bear fur can be trimmed to your desired height if you prefer shorter grass, but the long, wavy stuff looks great on the table.