The War for the Golden Isle! 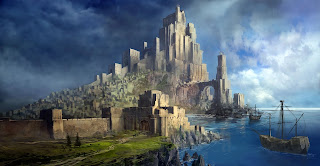 An island has been discovered in the dead center of the Infant Sea. Which is strange because cartographers and explorers have both been unable to explain its appearance, it seems to have just magicked itself into existence.

The island is the size of a small kingdom, with a coastline ranging about 20 miles all the way around it. While the discovery of a previously unknown island is not anything particularly special, this one is strange in that there are the remains of settlements that must have been built hundreds of years ago, and no one can identify the type of architecture that was used for its construction. It looks somewhat like dwarven handiwork, but then they’ll find something shoddilly constructed in the middle of town that a goblin would have called home.

The remains of a massive port city makes up the western edge of the island. Stone docks and constructed sea walls span a bay large enough to hold several fleets of significant sizes. Outside of the town there is a large mining camp where it was quickly discovered to house a massive gold vein, enough to buy several of the successor kingdoms back on the mainland.

Strangest of all, however, are the ruins of an ancient looking temple in the eastern beaches of the island. Wizards that have visited this site experience strange visions of otherworldly creatures and phantoms wandering around the grounds. Part of the temple extends out into the water and lays submerged beneath the waves, and it has been reported to see ghost ships skimming across the waves on clear moonlit nights. At the center of the ruins is a giant plinth that houses what appears to be a prophecy, or a promise, that the person that controls the shrine herein will be given control of the beasts of the sky as well as the sea, as well. There is no denying the sensation of power that this place holds, and it has drawn even the eyes of the servants of the Green Lady to this mysterious island.

Between the natural resources capable of making any nation rich that would seize it, and the mysterious power attached to the temple ruins, there are many interested parties who have brought their ships and troops to try and capture the island for itself. Of these, only two have really been able to actually gain any real traction as potential warlords of the island. Kalip the Sneer, a goblin pirate who has amassed a significant fleet of orc and goblin warships and a massive amount of wealth by maurading across the Broken Isles and Hilmar Dag the Corsair of the North, a northman pirate with a sizeable fleet and conquests to his name.

Both of these generals have been gathering the other factions on the island together, either through trickery, bribery, or simple coercion, reasoning that they would be a better master of the island than their rival. Because of this, the warring armies, fleets, and rogue bands have flocked to the island in hopes of finding their fortunes, or preventing calamity befalling the rest of the seas. Whatever their reasons, the warriors are fighting a battle against each other for dominance over the island.

But as the weeks of battle continue to lag on, it seems as though everything is building to one final confrontation of epic proportions, one that will see the awakening powers of the sunken temple, as well as the riches of a lost city and the armies and fleets it can summon. Once the smoke from the cannons fade only the warlord that is left standing will be left to claim the spoils and name themselves a King of War.

Two areas to fight over:

All players can fight to change the balance of power in either of these locations by the following means, the victor in any of these games will report the game to their faction leader (Ben or Dave):

Both games are played normally, but both games finish their turns before moving on to the next round, with the Armada side choosing their own scenario. However, at any time a ship can fire its cannons so long as they are within range of the 6x6 island. Whatever shots hit, roll for damage, if an indirect shot is fired, roll the scatter on the KoW board with the intended impact point being the center of the tower and the scattered area for the blast still being 12 inches. All units with the majority of their base within the scoring point of the Dominate ring at the end of the current player’s turn when the shots are fired suffer as many wounds as are rolled regardless of armor and must take an immediate nerve roll. The one exception to this is the rounds 6 and 7 for KoW, where the wounds do not cause nerve rolls.

Units that are manning the tower count as double their scoring value and are fearless so long as they are in the tower. The controlling player of the tower can also use it as an emplaced guns for Armada in the Armada game that cannot be destroyed.

Both games report their results separately with the same results listed above for their respective types.

At the end of the Campaign (On March 18th) there will be a massive final battle played out however players wish to achieve it with the following rewards. The side that controls the Port City will gain an extra 10% for their points for building their lists. The side that controls the temple will receive a free creature corresponding to the size of the battle being fought which will be revealed at a later date.

How do I submit battle results?

First email goldenislewar@gmail.com to register your email as a participant and to declare your allegiance to either Kalip the goblin pirate or Hilmar Dag the barbarian corsair. Then you will be sent the form that you will fill out for battle results once the campaign starts on February 11th. After that, you just need to play any game that you want, it doesn’t matter if you use our scenarios or just play any game, so long as it is using either Kings of War, Ambush, or Armada rules from Mantic Games. Even if you homebrew some rules for your own games.

Any games count. Tournament games, basement games, scenarios that we came up with, or ones that you thought up yourself. The only requirement is that they be games of Kings of War, Ambush, or Armada.

Posted by Refugee of the Olde Worlde at 11:23 PM