Something that I've always striven to do is produce ancillary things for players to do as an extra bit of fun. Last year it was misfortune bingo as players were able to mark off different things that went wrong in their games until they were able to mark off Bingo on cards that were provided them, this allowed them to pick up a little something extra for their misfortune.

This year I've taken it a step further and added another layer. Instead of Bingo this year, players will have Gamer Achievements akin to those on Xbox Live or something along those lines. Players will receive points for the achievements that they unlock which they will be able to spend on different other prizes that will be available to cash in between rounds. There will be a 100, 250, and 500 point level of prizes that players will be able to choose from provided that prizes are not sold out before they redeem their points.


-Have a monster kill a unit only using their breath weapon.

or more points less than the defeated one)
-Win a duel between two heroes.

-Roll Snake Eyes on a route test where any other
number would have routed the unit.

-Have an individual hero hold off a monster, large cavalry, or
large infantry unit for 2 full turns of combat by him or herself.

-Let your opponent go back and do something that they
forgot to do in a previous phase/turn of the game, such as shooting
with a unit even though you’re in the melee phase.

-Sacrifice your most expensive unit (have it die without causing any
damage or carrying any loot or push tokens) and still win the game.

difference between you and your opponent)

-Win the scenario while earning less attrition points than your opponent.

-At the end of the game, your opponent only has a single unit still on the board.

-Lose a game where neither you nor your opponent score a single
attrition point (i.e. neither of you loses more than 499 points of your army)

-Have a loot or push token change possession between you
and your opponent’s hands at least 3 times before ending in your
possession at the end of the game.

-Have a non-flying troop or regiment (not a horde) route a
flying monster, troop, regiment, or horde in melee all by themselves.

-End the game with only a single unit of your army left on the table.

-Get a rear flank charge with a non-flying regiment or horde without using Surge.


-Have a unit that is 125 points or less route an enemy unit worth 200+ points
all by themselves.

Player's must get their opponent's signature from the game where each achievement was unlocked for it to be valid. Players can then trade in their achievements between games or at the end of the tournament. Keep in mind that when turning in achievements that you are in fact turning in achievements and not points. So if you turn in a Sole Survivor and an Agent 47 achievements to unlock a 100 point tier reward, you are losing 125 points, and you don't get the 25 points in change back, so that's something to consider before coming up to trade in points.

This should bring some levity and alternative strategy to some games and will hopefully increase the fun factor for everybody!

Now, onto the second order of business! We've had another shipment show up from our sponsors over at Shieldwolf Miniatures! These guys produce some amazing plastic and resin kits on their website (I recommend looking at their mammoth all you Ogre players out there, friggin' beautiful). These models are great for units, they have great monsters, and are constantly growing their product line to add more things to them. On top of that they have a very unique feel to them which will give your army the extra flair that they need to stand out in your opponent's memory when it comes time for voting for preferred opponent!

This year they've been really generous with us and have sent us a box of their mountain orcs, a box of shieldmaidens, and several heroes that will be added to our roster of models you can pick up as part of your registration. Take a look! 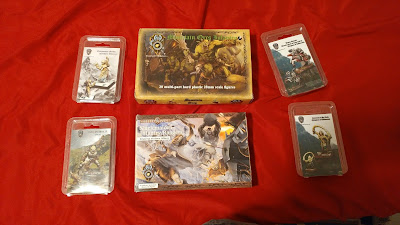 I love these guys as they are so supportive of the tournament scene and they really do produce some awesome minis. Please go spend some of your hobby dollar with them.

Also, unfortunately, Creature Caster have stopped responding to the emails that I have sent them over the past several weeks so it looks as though they will not be one of our sponsors this year, I'm sad to say. This is too bad as they do produce some really great minis.