It's been a while since we last had an update. At present we have 7 players signed up with 2 paid. I thought I might throw out some more incentive and post that all those that sign up and pay before the deadline of September 18th (fast approaching) there will be added onto your bag of goodies (which is looking to be quite hefty in all honesty already) a collapsible dice try for you to pack in with all your other items and nic-nacks that go with you to your local game nights or tourneys. These are pretty sweet and look great with faux leather backing and velvet interior. Sign up now before this option goes away. If you're one of the two who've already paid, don't worry it's already been added to your swag.

Now. Onto the main topic, we're talking more trophies today, For starters we have the Players' Choice award for this year. Like last year it is a drinking horn, but that went over so well we decided to do it again this year! 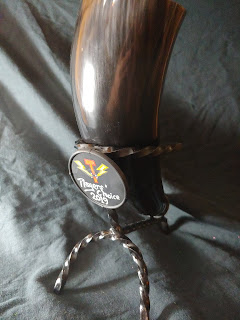 As you can see it's an actual bone horn for you to put the imbibement of your choice in. It will go to whoever receives the most player's choice and favored opponent votes. Take a look at the Player's Packet tab above to find out how to receive those.

\Next we have the Counter Charger Award. This award goes to the player who places literally in the middle of the pack as far as battle is concerned. Meaning that if there are 10 players at the tournament the player who comes in 6th in battle will receive this fine trophy: 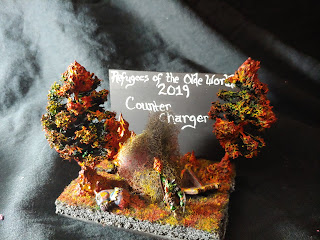 That's all we have for today! I hope you guys like the trophies.

Today's post was brought to you by Atlantis Miniatures who have sent us some lovely goodies to give away at the tournament this year. Honestly guys, you get more than your ticket is worth in schwag alone, it's worth the price of admission, so bite the bullet and come on out to Idaho for a fun weekend of gaming!
Posted by Refugee of the Olde Worlde at 4:42 PM No comments:

The player packet is up! Take a look by clicking on the link in the header or here if you're too committed to this article to scroll back up. The packet will detail how scenarios are scored and how awards will be given in the tournament. It also gives a schedule of events and answers the most frequently asked questions about the tournament in general. Please give it a look and if you have any questions, feel free to ask them!

One of the details that I also want to highlight is one of the additions to this year's event. That entry is the Protector of the Masses!

Here is the entry for the Protector taken straight from the player packet:
Protector of the Masses:
As an additional portion of this year's tournament, we will be adding a required special character for each army. This model represents the leader of your refugees as they struggle to find their place in this new world. As such this character is an inspiration to all those around him, either through fear, admiration, or just a desperate need to have hope in something.

The model for this character must be an infantry model and must fit on a 20 or 25 mm base and has the following stats:

Refugees of the Olde Worlde was founded as a part of the community that switched over to Kings of War with the death of 8th edition and the "Olde Worlde" we left behind. As such, the Protectors of the Masses are those whose leadership has been imperative with helping us, the gamers, to transition from one world to another. Now you get to include those people on your tabletop for a tournament!

This is a fun opportunity to pull out a cool model that you've always wanted to use, but never had a reason to. Paint it up and bring it with you to function as your Protector. There will be bonus objectives revolving around this character throughout the weekend.

There are no restrictions on what your model is for your Protector, except that it must fit on a 20-25 mm base. It does not have to be the same race as the rest of your army, nor does it need to share the same color scheme (though that's probably a good idea for appearance scores). All that matters is that it is an infantry model that can fit on a 20-25mm base. That's it!

Lastly, I just want to stress that the timeline is quickly approaching the deadline for early registration, we're a little under 2 months away from that closing and only 3 months from the event itself! If you plan on coming, please hurry and pay your registration!

Posted by Refugee of the Olde Worlde at 12:36 PM No comments: 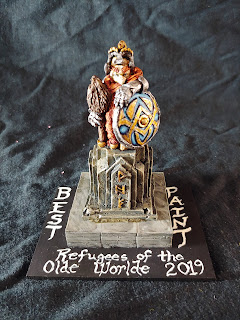 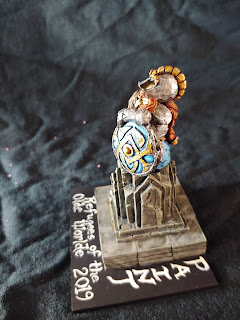 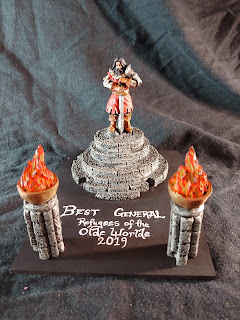 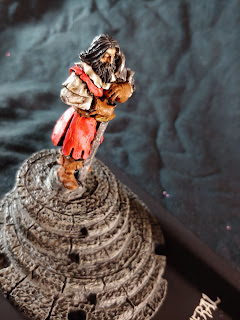 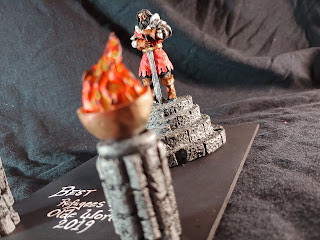 Posted by Refugee of the Olde Worlde at 10:06 AM No comments:

The Call Goes Out Once More!

It is that time once more, my fabled generals, to announce the coming of Refugees of the Olde Worlde GT 2019 On October 18-19! 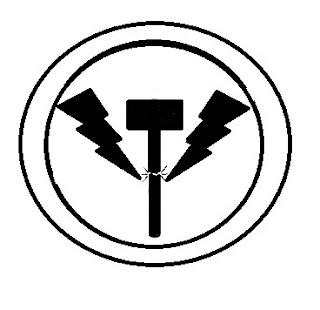 This year is looking to be a good one. We've already been in talks with our sponsor from last year who supplied our Best Overall trophy and we are proud to have them back on board to supply prizes this year as well, so be looking for future posts talking about Weapon Masters and the trophy(ies?) that they will be working with us to provide. Super excited about this!

Beyond that there will be a few changes to the format this year. We are still doing 5 games (2 Friday and 3 Saturday) with the lowest score of games 1-4 being dropped.

There will be trophies for 1st and 2nd Best Overall, Best General, Best Paint, and Player's Choice, as well as Counter Charger, Rookie of the Year, and Bloodiest General. The general raffle into which all players are entered is still going to be present.

Format will be as follows:
5 games at 2100 points + a 150 point character with the following stats:

Each army will be required to bring their own model to represent this hero and must designate which model it is at the beginning of each round to their opponent. The model does not need to be the same race as the rest of their army and must fit on a 20-25 mm base.

There will be a prize for the Best Protector model that is brought to the tournament.

Games will begin Friday evening at about 5:45, players will have 65 minutes each per game (so 2 hours 10 minutes per round). Clocks are encouraged and will be provided, however they will not be enforced if both players agree to not using them. If just one of the players wants clocks then they will be implemented for that game. The set time limit of 2 hours 10 minutes per round will be firm, with no extra allotted time to play each battle.

The five scenarios we will be playing this year are the following:

We will be using all CoK 19 rules (with the exception of the inclusion of Eliminate as one of the scenarios).

Historicals will not be allowed for this tournament.

There is a 24 player cap at this tournament, though if we reach that then we may be able to scrounge up more table space if the need arises.

The venue is Gamepulse on 52 E Main in Rexburg, Idaho.

I'm super excited for this year and hope that it'll be the best we've had so far.

Watch this space for forthcoming details!
Posted by Refugee of the Olde Worlde at 8:03 AM No comments: